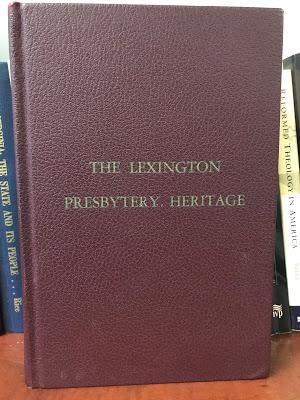 This is the first in a short series reviewing some of the books I have been using as sources for my upcoming study of the History of Presbyterianism in West Virginia.


This book was gifted to me some ten years ago, before my interest in presbyterian history blossomed, by someone in the presbytery whom I cannot remember. At the time I was exploring the development of West Virginia culture, and he must have thought it would be of interest. It was a smiling providence, because this book became the starting place for my readings in West Virginia Presbyterian History.

Lexington Presbytery divided out of Hanover in 1786 with twelve ordained ministers who were responsible for the vast Virginia territory between the Blue Ridge Mountains and the Ohio River. The presbytery was significant for West Virginia history because it mothered all missions west of the Alleghenies (in VA) prior to the establishment of West Virginia’s own Greenbrier Presbytery in 1838. After Greenbrier, the presbytery limits were mostly in and around the beautiful Shenandoah Valley.

The author, Dr. Howard McKnight Wilson (1900-1988) was a minister in Lexington Presbytery from 1926 until 1964, and served as moderator of both the presbytery and the synod of Virginia in 1961. He was educated at Union Seminary in Richmond and wrote several other historical works about the Shenandoah Valley. He served for a time as the pastor (and historian) of the historic Tinkling Spring Presbyterian Church, whose most famous reverend was Robert Lewis Dabney. His writing appears authoritative, balanced in detail and flow, easy to read, and well-researched.

This book has three parts. In 72 pages, part one describes colonial, pioneer, revolutionary, and ecclesiastical contexts prior to and during the founding of the presbytery in 1786. The Presbytery itself does not enter the story until page 66. Part two (104 pages) covers the development of the presbytery up through 1970, with greatest focus on expansion during the Awakening, the divisions of the Schism and the War, and the reconstruction period. The final and largest portion (as I have discovered is customary with presbytery histories) gives micro-stories of dozens of individual churches by county, most of which were organized after my period of interest (i.e., the Premodernist theological era).

Even though the larger portion of Lexington Presbytery was originally in West Virginia, that was never really the book’s focus. Wilson spends most of the reader’s time on developments in the Shenandoah Valley and church relations east and north. By the time the book gets around to individual churches in the third part, the presbytery boundaries have been redrawn multiple times and the territory west of the Alleghenies is no longer under consideration. The flyleaves contain maps that show eight different fluctuating iterations of the how the presbytery borders have been redrawn at various times over nearly 200 years.

Still, the book gave helpful historical and cultural context and insight into details of particular interest to me, like early colonial and pioneer education, licensure, and ordination. And since no work (yet) exists that pulls together the whole presbyterial and denominational picture of West Virginia, this book lays out a necessary piece.

Posted by ReformingWV at 2:41 PM