My son’s friendly nemesis at school--Bub--has continued to try to destroy my son’s faith in Christ. Lately he presented the following chart: 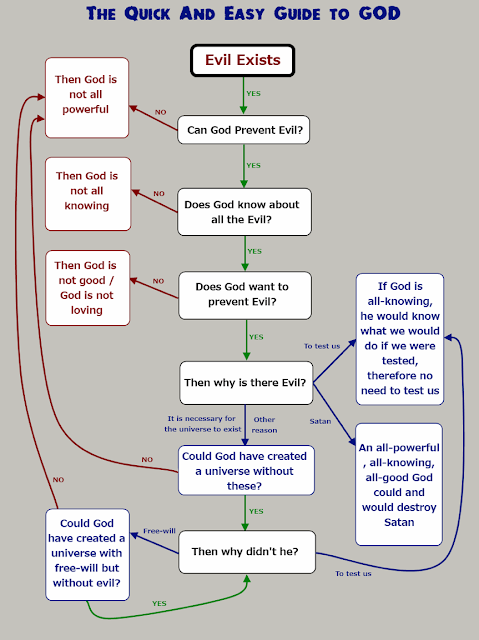 Bub has presented a very real dilemma for Christians, a variation on the problem of evil. It deserves a response, and so does my son.

The first thing to note about Bub’s chart is this: it does not actually disprove the existence of God. It is not clear to me whether Bub realizes this. Nowhere in the chart does Bub zap God out of existence. He only asks a couple of “why” questions. Christians have asked these same questions (and many more) for centuries without presuming God does not exist. They have spilled much ink on the topic: hundreds of thousands of books, articles, and treatises, written by thousands upon thousands of faithful theologians, over the course of two millennia. However, Bub is apparently satisfied with what he has come up with--probably stolen from the Interwebs--which would be embarrassing if he only knew a little more, because . . .

Secondly, Bub appears to be very limited in his imagination. He cannot imagine answers to his “why” questions that he would like, and his imaginings are very wan. He has thrown out a couple of glib answers, but seems unaware they have not disproved God and are not the least bit exhaustive. Even Christians have been more imaginative, and they are on God’s side! Christians have never shied away from working through the hard things about their religion. They have applied themselves to problems much harder than what Bub has come up with. So he is neither well-read nor imaginative. But that is not his chief problem.

Thirdly, Bub’s chart reveals that he cannot imagine a God he would like, and what’s more, he has settled into his dogma so easily, after so little effort. No option he has imagined is one he likes.

Now, it is unfair to expect a high school student to know very much about such massively complex philosophical and theological topics. So I would suggest that how much he knows is not really his chief problem. Were he to spend more time thinking about it, or to read the thoughts of others on the topic, he still would never encounter an answer that he would like. Thus he reveals his chief problem is his predisposition, the state of his mind and heart before he even poses the questions. He’s not really out for answers, as though he might encounter one to which he would take a liking. He is predisposed to not like any answer because he is incapable of imagining a God who could give an answer that he would like. Which means that Bub would not like The-God-Who-Is, even if he were willing to listen to an answer from him.

None of this is surprising to thoughtful and well-read Christians by the way, because of what Scripture teaches about mankind’s disposition toward God apart from his disposition-changing grace.

Who Does He Think He Is?

Lastly, we should note that even though he has demonstrated himself to be only meagerly qualified, Bub has effectively set himself up as the judge of the One-Who-Is.  An unwitting god-of-gods.

Bub has not at all disproved that God exists. He has not yet heard or even imagined what the Creator’s answer might be. And yet he has unknowingly stood before the Lord of the Universe and declared him to be out of line and thus not worthy of being God.

Bub has no clue what a desperate situation he is in.
Posted by ReformingWV at 9:33 AM

Email ThisBlogThis!Share to TwitterShare to FacebookShare to Pinterest
Labels: apologetics