There's a Twist in the New Testament 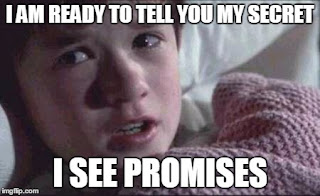 I am ready to tell you my secret: I see the promises. Walking around in the New Testament like the Old Testament Promises. Only some people can't see them. They only see what they want to see. They don't know they are the promises.

How often do I see them?

All the time. They're everywhere.

The Abrahamic Covenant was a big deal in the Old Testament. Where did it go in the New Testament? Didn't it just kind of disappear? Maybe because it's now the church's time and not Israel's time, and it won't reappear until it is once again Israel's time?

Nah. It's still there. Everywhere. I mean EVERYWHERE.

If you want to see a bunch of those words all in one place in the New Testament, check out Galatians chapter three. Look for the words listed below. They all refer to the Old Testament promises God made to Israel through Abraham.

They are the same promises. Same covenant. Same inheritance. Same blessing. But look at whom they were meant for. And look at what they refer to.

Can you see that there is so much more to what they refer to and who they were meant for than what you thought? That's the twist! Still can't see it yet? That's kind of why the New Testament calls all this a "mystery"--something that was less clear, now made more clear. Unfortunately, it's still a mystery to many. They just cannot see it.

Here's those words in Galatians 3. Read them in context, and then start looking for them elsewhere in the New Testament.