All About Jesus: Dispensationalism vs. Covenantalism

The fact that the Covenant Promises have never been completely or permanently fulfilled for Israel is acknowledged by most Bible-believers today. However, some differ greatly about what that fact implies. This difference weighs heavily upon how huge portions of Scripture are interpreted.

Dispensationalists believe that the Covenant Promises remain to be fulfilled for the Jews. Someday God will keep all the promises he made to the nation of Israel. The Jewish people will once again be gathered together and given the Promised Land as their own uncontested national territory. Jerusalem will finally be at peace. 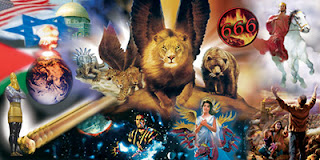 Since this has not yet happened for Israel, all those Old Testament prophecies about the restoration of Israel have not been fulfilled, which means that huge chunks of Scripture contain prophecies that must be fulfilled in the future. This explains why more extreme forms of Dispensationalism are bizarrely fascinated with end times prophecy--talk of blood moons, bloody rivers, locust-like helicopters, and equating characters in Revelation with modern nations. They draw detailed maps and charts, sell books, and excite gullible people into an almost cultic paranoia about international events. Some even go so far as to claim they can predict when specific end time events will occur. Thankfully, most Dispensationalists are not this extreme, but I write this to suggest that you the reader would do well to be able to identify them when you see them.

On the other hand, Covenantalists believe that the reason the promises were not fulfilled in Israel was that they were not ultimately intended for Israel alone. They were intended for Jesus Christ and all who are united with Jesus Christ, whether they be Jews and Gentiles. According to Covenant theology, Israel served its earthly purpose of being a shadow or earthly copy of all those who would become God’s children through Jesus Christ. The New Testament reveals that the New Covenant children of Abraham include not only believing Jews but believing Gentiles. This means that being a “child of Abraham” is a matter of spiritual descent (or even better--adoption) instead of physical descent.

This inclusion of the Gentiles in the chosen family of God is referred to in many places in the New Testament as one of the great “mysteries” of the Old Testament. To say that this was a mystery is not to say that it could not be known by those who had eyes to see and ears to hear, but rather that it was not spelled out as clearly as it one day would be when the time was right. The Old Testament contains many hints that the children of Abraham would one day comprise far more than just the Jewish people. For instance, God promised Abraham that he would be the father of many nations and that he would be a blessing to all the nations of the earth, and he enfolded several non-Jews into the lineage of David and Jesus. These “mystery” hints are everywhere in the Old Testament. When you know they are there, they begin to stand out as you read the Scriptures with freshly opened eyes. There are even places where he calls pagan nations his people. Unfortunately, this is still a mystery to some people who study the New Testament.

Covenantalists see overwhelming evidence in the New Testament that it was God’s plan from the beginning to fulfill his promises to Israel in and through Jesus Christ. They do not believe that any Covenant Promises remain to be fulfilled outside of Christ, which means there are no king, land, or people-promises left for physical Israel in any physical way. If physical Israel is ever to have any hope of particating in the Covenant Promises, they must believe in Christ and be grafted back into the people of God. Fortunately for the Jewish people, Paul hints that God will have mercy upon some future generation of Israel and will bring them to faith in Jesus Christ. Then and only then will they participate in the Kingdom promised to Abraham and all his descendants.

The root difference between these two interpretations is that Dispensationalism believes Israelites are the people of God in a way that New Testament believers are not. Therefore Covenant Promises made specifically to them have yet to be fulfilled. Covenantalism believes that Old Testament saints are united in Christ together with New Testament saints to form one body in Christ. This body is the inheritor, through Christ, of all the blessings, promises, and benefits first promised to Abraham. Covenantalism looks to Christ as the fulfillment of all the Covenant Promises: He is the King of the Kingdom, all his saints are the people of the Kingdom, and the world he conquers is the Land of the Kingdom. In this Kingdom God will dwell, and its citizens will be his people, and God himself will be with them as their God. On the other hand, Dispensationalism looks for a future kingdom set up in the land of Palestine specifically for the Jewish people.

This difference changes the way huge portions of Scripture are interpreted. The Old Testament is filled with a multitude of prophetic references to the future restoration of Israel as the result of God’s Covenant faithfulness to his chosen people. Whereas Dispensationalists see this as the Jews someday getting what is rightfully theirs, Covenantalists see this as Jesus Christ getting what is rightfully his.


On the one hand, all about Israel; on the other, all about Jesus.
Posted by ReformingWV at 9:59 AM