If you are a church pastor, teacher, or a Christian who really enjoys reading theology, you probably own a systematic theology or two. Chances are you have some old Reformed volumes by the likes of Charles Hodge, Archibald Alexander Hodge, and Louis Berkhof.  I hope you do, because they are worth reading and referencing often.

But I would like to survey four relatively recent systematic theologies that have become the "standard works." If you want to "read theology" in a broad, thorough, current way, these are the go-to works.

Coming on the scene in 1983, Erickson is the oldest of these four systematic theologies and has been a standard seminary text for about 35 years. It is well-respected, widely used, thorough, baptistic, somewhat Calvinistic (Amyraldian?), and very easy (and even fun!) to read. Erickson summarizes the breadth of theological options on any given point and then gives his own position on things. Because the work is older, it lacks interaction with some more recent theological developments, but it is still a great text for a quick survey of the theological options.

Frame's systematic theology is very reformed, as one would expect, but is also lopsided: much discussion of theology proper and epistemology, but (some would say) too short on Christology and Soteriology. Frame focuses on what he has been good at (and already written about extensively in other, more-full volumes).   He really likes his Tri-perspectivalism, which means (forgive the oversimplification) that he feels compelled to describe nearly everything from the same three complementary perspectives. Sometimes this lens seems artificially superimposed, unnecessary, and unhelpful. It is definitely unique. Frame's work is the most difficult to read of the four volumes listed here. Presbyterian. 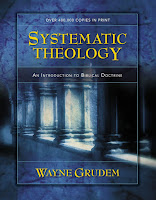 Grudem's theology is the most traditional of the four volumes. It is also, as Michael Bird might say, the most "prooftexty."  For that reason, Bird appears to disdain it, as if Grudem has done something wrong.  But Grudem has done what systematic theologians have always done: Organize things in standard ways and show where in the Bible the ideas come from. It is probably the most encyclopedic and complete of these four. Definitely Calvinistic, but not Presbyterian, and not Baptist either, as far as I know.  If I remember right, he is a mild continuationist. 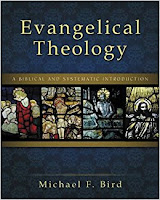 
Bird's theology is the most fun to read of these four.  He is relatively conservative, Calvinistic, and Anglican (I think). But he has a refreshing European perspective that did not originate in American Fundamentalism, as all the others on this list did ('cept maybe Erickson). He provides a glimpse into how conservative theology can be done apart from American Fundamentalist Exceptionalism. That can be uncomfortable at times ("Should he really be referencing that author without greater qualification?").

Bird says he wants to do theology like everybody else has failed to do--from a uniquely Gospel-oriented framework. But apart from reorganizing stuff, and skipping a section on the Holy Spirit, I don't think he has really reformed theology as much as he thinks he has. He also says he hates prooftexting (and mercilessly criticizes Grudem for it).  But, like theology requires, he prooftexts anyway (He keeps using that word.  I do not think it means what he thinks it means).  Also, I think in a few decades this work will be more dated than the others, because he bizarrely includes pop-culture references, like he is not just trying to do theology in a new way, but in a cool way.  Still, this is my favorite of the four to read, but it would not be my first to reference.  That would probably be Grudem, followed by Erickson.

Posted by ReformingWV at 9:52 AM